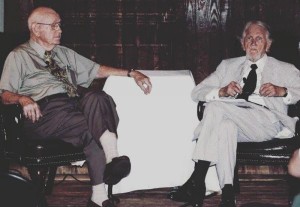 Sunday, July 10, 2016, Bobby Lee Cook and Bob Baker delighted an overflow crowd with their recollections of life in this county. The event was the summer meeting of the Chattooga County Historical Society, held in the freight room of the 1918 Summerville Depot.

Mr. Cook, 89 and one of the nation’s most famed trial lawyers, has practiced law in 37 states and three foreign countries and has been well-acquainted with five presidents of the United States. Asked to recall just a few memorable cases he first made clear, “All trials are important—outcomes affect the lives of rich and poor alike.” The first case he tried, as a court-appointed lawyer and therefore making little or no money, was a murder that had taken place in his native Chattoogaville.

Some of his more publicized cases include his 1986 defense of Tennessee banker C.H. Butcher Jr. and the 1979 Rockefeller-Carnegie case over Coastal Georgia land that had been seized by the federal government at an unfair price. Another memorable case was defending Savannah socialite Jim Williams of Midnight in the Garden of Good and Evil fame. A more recent case in which he takes pride was Plymel vs. Teacher’s Retirement System of Georgia, on behalf of retired educators who had been shorted benefits in their pension plans.

From Soda Jerk to Recognized Author

Mr. Baker, 87 and the author of a comprehensive history of Chattooga County, had a distinguished career with the State Game and Fish Department and the Georgia Department of Natural Resources. He had several interesting vocations prior to joining DNR, among them serving as a police officer in Summerville and acting as first public address announcer for Summerville High, as well as popping corn and “catching curb” at McGinnis Drug Store. His Chattooga: Story of a County and Its People was published in 1988, in conjunction with the county’s sesquicentennial celebration.

Both gentlemen were asked about growing up in Chattooga County. Baker, son of the late Joel Edmond and Bonnie Prickett Baker, recalled, “I spent a lot of time on the streets of Summerville. My dad was chief of police and people were only too happy to tell him if I misbehaved. There was no City Hall then, so our house served as the police station, and the patrol car was my dad’s personal automobile. This worked out well during World War II as police cars were allowed additional gas under the rationing regulations.” He recalls that there was much less crime in the 30s and 40s. “Most of those locked up were Saturday night carousers who were drunk in public.” 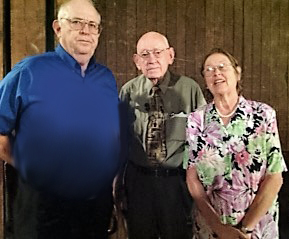 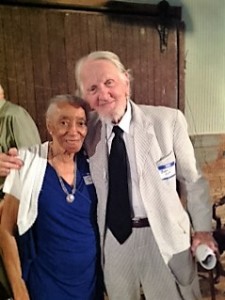 The question about most influential teachers brought an interesting answer from Baker. “My second grade teacher was my eldest sister, Eddie Baker [later Mrs. Carl Russell]. She had a special ‘talent’ for discipline, and other grammar school teachers would send their young offenders to Eddie for paddling. She had a little room to the side of her classroom where the paddling would take place—eliminating the humiliation of a public whipping. If I misbehaved, Eddie would whip me—but in front of the class to make sure they knew her little brother got no special treatment. Within the first couple of weeks of second grade, I learned a lasting lesson.”

“When we got home, Eddie said ‘Mama, I had to whip Bob today.’ Instead of sympathy, I was instructed to go get a switch—it took two or three trips to get one Mama thought would do the job. When Daddy got home, Mama said, ‘Eddie had to whip Bob at school today.’ Then Daddy took me to the bathroom and used the belt from his policeman’s uniform.” Three lickings for one infraction! “After just a few weeks of second grade, I was the best behaved boy in the school.”

Cook, son of the late Paul and Alma Edge Cook, remembered growing up in the Chattoogaville area, “My father farmed, raised Black Angus cattle and ran a general store, so there was always plenty to eat. He sold anything anybody needed in those days. My parents were hard-working people. During the depression my mother worked at the Trion Glove Mill. We did not go to town often because there was no particular need to go.”

Gene McGinnis, the program moderator and son of the late Harry McGinnis, local drugstore owner, observed to Mr. Cook, “My friends always asked me if I could have all the free candy I wanted or if I had to pay. Did you get free candy from the store?” The venerable lawyer quipped, “Oh, yes, free candy then and a helluva lot since.”

Asked about those who had inspired him in his life and career, Cook immediately cited the late Judge Clovis Rivers (1867-1953). “Judge Rivers was the City Court Judge in Summerville. He was a Latin and Greek Scholar. He had no interest in making money. He was passionate about the law, and was a true humanist. He was a talented artist with a face like Moses. All who knew him loved him.” Those memories of Judge Rivers served Mr. Cook in good stead in the early 1960s when he served as State Court Judge in the county, having already served as both State Senator and Representative for the area.

Interestingly, he also mentioned being inspired by Lord Thomas Erskine, who sacrificed his law career to take on the defense of revolutionary Thomas Paine who, in 1792, had been charged with seditious libel after the publication of the second part of his Rights of Man. 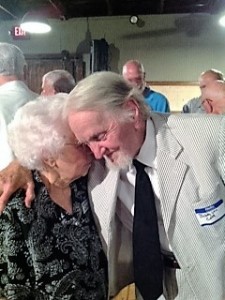 Asked about memorable Chattooga characters with whom they had come in contact, Baker responded, “Of course, Homer Sanders was a memorable person, with his red wagon delivering the Summerville News. Junior Housch was also another interesting character to me. Junior was a black man who dug most of the graves at that time. He fascinated me because he caught rabbits and because he walked the sidewalks of Summerville picking up loose change. He could spot a nickel a block away. Homer ‘Flunky’ Langston also impressed me. He worked at the post office, carting mail to and from the Depot twice a day. Flunky was always in a good humor and smiled all the time.”

Cook said, “Daniel Lee McWhorter, the local banker, comes immediately to mind. He was an honorable man—and he let me borrow $500 to set up my first law office over McGinnis Drug Store. Mr. Jim McGinnis was also a wonderful human being. When June and I were courting, I bought Evening in Paris perfume for her in his store. Mr. Frank Logan was also a memorable man, very philosophical.”

Baker, recalling another local personality, mentioned a story from 1932. “Homer Wyatt was an African American man who worked in the Summerville Cotton Mill as well as cleaning the offices of Drs. H.D. Brown and F.W. Hall above the drug store. A man named Fred Edmondson had killed himself this particular day, and Homer knew his body was in the adjoining Brittan Brothers Department Store and Funeral Home. He was working at the front of the building when he heard the floor creak. He turned around to see a casket on casters slowly rolling across the hallway between him and the stairs.”

“I had to go somewhere,” Mr. Wyatt recalled later, so it was out the front window where a cloth awning saved him from serious injury—although it didn’t do much good for the awning. Furman Chapman, who worked for Brittan Brothers, came running up, alarmed and apologizing, realizing how close his prank had come to killing Homer Wyatt.

Inevitably, someone in the crowd asked Mr. Cook about the storied set-to between him and then-Sheriff Ruben Lyons (1909-1995) in 1951. The two were in court for a case before Judge Clovis Rivers. The line of questioning apparently displeased the Sheriff, on the stand and hemmed into a corner, getting progressively hotter under the collar. Picking up an empty bottle from a Coca-Cola crate sitting nearby, Lyons heaved it across the courtroom, narrowly missing Cook’s head. “So I had to beat the hell out of him. This went on for a while. Finally, Judge Rivers said, ‘I believe you’ve give him enough.’ Then we proceeded with the case.”

Chattooga Is a Fine Place to Live

Chattooga County means a great deal to both these gentlemen. Baker said, “This place gave me a good foundation. Everybody liked each other. The people were hard-working, six days out of seven, with church on Sunday.” He stated that he had been forced by the publisher to cut over 400 pages from his original manuscript and he regrets the stories left untold. Asked about what he would include if he started a second volume, he said “Well, first of all, I would go and have my head examined.” He went on to state his hope that young people in Chattooga County will show interest in learning about and preserving its rich history.

Mr. Cook added, “I came back to live in Chattooga County just because I wanted to. I had the impression that I could be just as fine a lawyer in Chattooga County as I could in Washington or New York. I continue to believe that. This is the best place to live I have ever known. There is no better place to raise a family.”

Following a question and answer session covering numerous topics, the program concluded with enthusiastic applause from the packed-to-the-rafters crowd. McGinnis thanked these two elder statesmen for sharing their memories and for all that they have done to support Chattooga County. He said the Historical Society plans to continue its tradition of putting together panel programs showcasing interesting local personalities. 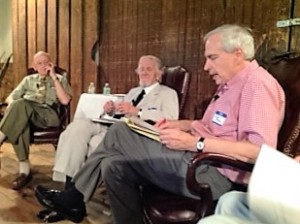