Heaven seemed a little bit closer to Chattooga County on Sunday night, August 31, 2014. It was as if the calendar had flown backward fifty years as the tradition of long-ago singings at the Chattooga County courthouse was renewed. Three hundred folks filled the upstairs courtroom, just as they had in days gone by. The event was sponsored by the Chattooga County Historical Society in commemoration of the county’s 175th anniversary. The group’s president, Gene McGinnis, introduced the program by giving a bit of background on the singings of the past, drawing from the reminiscences of county historian Bob Baker.

The event was bound to be a success. It was bolstered on both ends by the fervent prayers of two local ministers. County native, Minister Melvin Mosley, opened the program praying that God would bless the singers and that the listeners would be blessed and cheered by being there. Apparently the Almighty was listening because the program surpassed the organizers’ expectations in every way. The evening also provided an opportunity to welcome a relative newcomer to the county, Dr. David Hunter, pastor of the Summerville First Baptist Church, who prayed the benediction.

Churches Band Together in Fellowship

There was lots of congregational singing, including old-time favorites like Bringing in the Sheaves and Victory in Jesus. Song director Don Groce kept the program moving at a brisk clip. Pianist Karen Gaines, along with the group Just One and Dr. David Snow, provided spirited accompaniment throughout the evening. 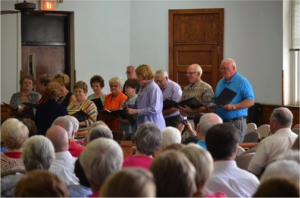 Many churches in the county moved their Sunday evening services to band together for this special time of fellowship, music and memories. The courtroom held many of the family members of the men who produced the exciting singings of the 1940s to 1960s. The song leader, Don Groce, is a third generation singer in the county. His grandfather, an earlier Don Groce, was one of those dynamic early leaders. Jane Stephenson Petitt was surely remembering her father, the late Will Stephenson, another singing organizer. The late J.A. Wilson would have been proud to witness his grandson-in-law, Earle Rainwater, performing with the men’s quartet from First Baptist in Summerville.

There were more than twenty churches represented in the room—from a half-dozen denominations—and some churches also sent their choirs to represent them. Outstanding performances were logged by the choirs of Beersheba Presbyterian, Horizon Baptist Fellowship, Summerville First United Methodist, South Summerville Baptist, and Summerville First Baptist.

A.M.F. Brings Down the House!

Other special music was provided by quartets and trios. Summerville’s Mission Minded sang the old Chuck Wagon Gang favorite A Beautiful Life. The “house band” for the evening, Just One, led a lively few verses of I’ll Fly Away. Denise Brown represented the New Bethel Baptist Church with a moving solo. Later in the program, the excellent trio from Summerville First Baptist, made up of Don and Teresa Groce along with Christy Cox, accomplished some beautiful and intricate harmonies with their a cappella rendition of several old favorite hymns. 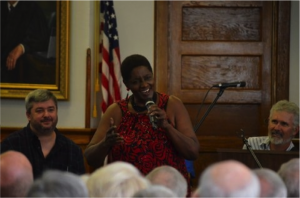 The evening was truly one highlight after another. The perennial favorites, The A.M.F. Quintet—still going strong after more than fifty years, provided a moment of levity fairly early in the program. As sisters Jeneal Farmer Johnson and Linda Farmer Hawkins took the stage, Linda said “Well, I suppose when I asked our group to meet at the courthouse, I should have specified which courthouse!” She had just received a frantic phone call from two members of the group who were waiting to sing at the locked courthouse in Calhoun! The missing ladies arrived later but not until Jeneal and Linda had delivered an uplifting version of Amazing Grace. The crowd called for an encore. They gave a rollicking version of Down By The Riverside that would have made Mahalia Jackson proud. To quote one listener—“They tore it up!”

After Dr. Hunter’s prayer at the end of the program, the group adjourned downstairs for refreshments and fellowship in the lobby of the historic old building.

The County-Wide Fifth Sunday Night Singings are becoming a new “old” tradition in the county, held at a different venue each time. The next singing will be held on November 30, the Sunday after Thanksgiving, at the West Summerville Baptist Church. If you would like to participate on the planning committee or if your church choir would like to sing, please contact Steve Strickland or Gail Rush.