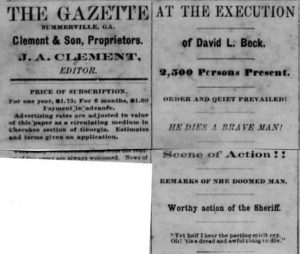 Friday the 27th day of April 1877 will long be remembered in Summerville. It had been raining during the night before and continued to rain at intervals during the day, sometimes pouring down in heavy showers; but it did not prevent the assembling of an immense concourse of persons of both sexes. Early in the morning the crowd commenced gathering, some on foot, others on horseback in wagons and every other imaginable conveyance. About 12 o’clock the Sheriff with his guard brought the doomed man from his cell in the jail and he was assisted into the wagon before the door and was seated on his coffin, accompanied by the Sheriff and  his deputies.

The immense cortege then slowly moved down the Alabama road to the gallows, erected to the right of the road nearly one mile from the court house. Upon arriving at the gallos, he was taken from the wagon and seated under the gallows.   Rev. Messers Milner and Christian, who have been his spiritual advisors, then held a last solemn, which consisted in singing “There is a Fountain Filled with Blood” in which the entire audience were invited to participate. The Rev. Mr. Milner then offered a fervent and touching prayer, invoking the blessings of God upon the family of the poor doomed man and committing his spirit to the mercy of Almighty God. That solemn familiar hymn “Show pity Lord, oh Lord forever” was then sung, when a feeling benediction was pronounced by the Rev. Mr. Glazner of Alabama. The Rev. Mr. Shattuck was present and aided in the ever to to be remembered solemn service. Mr. Beck was then carried up on the gallows and seated on the platform when the ministers, physicians and numerous friends went forward and bade him a last farewell.

A more affected scene we have never witnessed. he was then led forward by the Sheriff and addressed the crowd as follows:  “Young gentlemen, let me advise you to keep good company, don’t use whiskey, and as I see a good many ladies here, I will say to them raise your children right. Don’t let them keep bad company or use whiskey. I am not afraid to die, nary a binary habit.” He then remarked to the Sheriff,    “I don’t believe I care about saying anything more,” and went back and resumed his seat on the side of the platform, where he continued to talk with many friends who were calling on him.  Several times, however, he would step forward and address himself to some person in the crowd, and once remarked, “Boys, I could bear this better if it is just, but God knows it is unjust. I only regret to died and leave my poor unprotected wife, but I am not afraid to die, nary a bit, nary a bit.”

Finally at 25 minutes to 2 o’clock the rope having been adjusted, the Sheriff in a pathetic and feeling manner requested the crowd to be silent and orderly, after placing the black cap over the head and face of the unfortunate man, drew the prop from under the door and the soul of David L. Beck was ushered into the presence of his God. He never struggled or seemed to suffer a pang. After Hanging 23 minutes Drs. Rudicil, Tucker, Bryant and Thomas pronounced him dead and he was taken down and placed in his coffin.

From the time he was taken from the jail until he was executed he never manifested the least trepidation. Not a muscle or nerve ever quivered and he never shed a tear except when bidding his ministers and physicians a last adieu. No man could have met his fate more bravely. He never quailed or faltered and when the Sheriff was about pinioning his limbs he conversed pleasantly with the Sheriff and his assistance about the distance he should be allowed to fall and other matters connected wit his immediate execution. From after the cap was drawn over his head he remarked “Farewell to you all, meet me in heaven.”

Thus ends this sad drama in the history of our county , and God grant it may be the last. It is proper , however to remark that no public execution was ever better conducted and it reflects the greatest honor and credit upon Sheriff Kellett and his well selected and discretions guard that there was not a single disorderly occurrence. The remarks of Sheriff Kellett just before executing him, were alike creditable to himself and poor Beck. He remarked that he was in the discharge of his duty; about to execute the extreme penalty of the law upon Mr. Beck;  that is was the saddest duty of his life, and that he hoped perfect order and silence would be observed by all present and that he hoped perfect order and silence  would be observed by all present; and then stated that he had never had in his charge a prisoner who had treated him on all occasions with such proverbial kindness and nad never one time murmured at what he had to eat or any treatment he received. He the appealed to the boys and young men present to desist from the shot gun and pistol “fashion” which had been too long a custom in our county and admonished them by the sad fate of the poor unfortunate man soon to be launched into eternity, to quit using them for fear they too might some day be occupying the place of Mr. Beck.

The condemned man was executed in a decent new black suit; and after his body was taken down it was given to friends who conveyed it to Mr. A . Mosteller’s where his wife had gone that morning to await the arrival of his remains which she is to convey to Lumpkin County for burial. The Rev. Messrs. Milner and Christian had kindly taken up a collection in the community, and secured her the means for the trip. She left on Saturday morning on her sad mission.

It is but justice to Mrs. Beck to state that she has shown herself a true woman and has done all that a devoted and affectionate wife could do to get his sentence commuted, or a reprieve , or pardon obtained. For weeks, she tried often on her knees before the Governor to save her husband from the gallows and finding every effort of her own , and his counsel and friends had failed, she returned to her husband and lingered near his side night and day until the morning of his execution. The scene in the jail when she left hi is described as one never to be forgotten by those who were present; and she left with the heartfelt sympathies of the community in her deep distress.  Even a short time before the execution it was hoped a commutation which had been asked for would be received but the Governor was in Washington city and when telegraphed to on the subject replied he could do nothing for his relief.

We noticed on the ground Messrs. Cayler, Grady and Rogers, reporters for the New York Herald, Atlanta Constitution and Chattanooga TImes and the press generally.