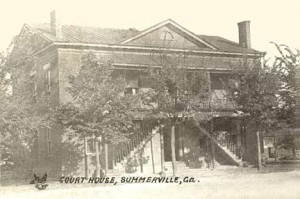 On March 23,1839 the Justices of the Interior Court were given authority by an act of the General Assembly to select a place for the county seat, buy land, divide it into lots and sell the lots to raise money for the construction of a county courthouse and a jail They purchased ninety acres of land from John F. Beavers for the sum of $1800.  Until this was done, the legislation directed that take place at the home of John Pickens henry. Subsequently ,the interior court may have designated Summerville as a county seat. In any event, the General Assembly on December 21,1839 incorporated Summerville and made it the permanent county seat.

The main reason the site would be selected other than its central location was the fact a big spring was located there. The spring known as Big Spring, Beavers Spring, Cleghorn Spring and finally Willow Spring was capable of furnishing water to the town’s residents for some time to come. There was some controversy as to the title of the spring which remained with Col. Beavers but there was an informal agreement that the town’s people could use the water.

The county seat of Chattooga County was originally named Selma and later changed to Summerville to advertise the pleasant weather in the area, and probably at the behest of David Taylor, prominent settler from Augusta. The first sale of lots went very slowly and it was not untill 1842 that a log courthouse was built at the corner of Washington and Jackson Street (now Commerce Street) which is the location of the courthouse today.

The first Courthouse was a log building built in 1842 by the Hitchcock brothers. Sometime later a two story brick courthouse ( pictured above)was constructed that served until the current courthouse was built in 1909. 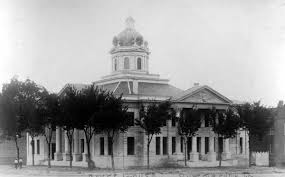 The current courthouse was built in the Neoclassical Revival Style. It was designed by Bryan Architectural Firm. The $60,000 structure was built by Falls City Construction Company of Louisville Kentucky.  F.L. McGinnis was the superintendent of the project. One of the unique features of the Courthouse is the stained glass window featuring the Great Seal of Georgia. This Window is said to have brought more fame to the courtroom than some of the typically”sensational” trials which bring temporary attention.

The dedication was held with the laying of the cornerstone at the new magnificent courthouse. This service was organized by the county Masons. It was held on July 15,1909. The articles placed in the cornerstone were History of Summerville Lodge No.109 F&A.M., a copy of the July edition of The Summerville News, a history of the bond election for the courthouse bonds, various Masonic document and various business cards of local businessmen. 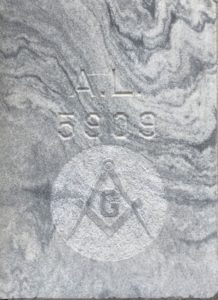 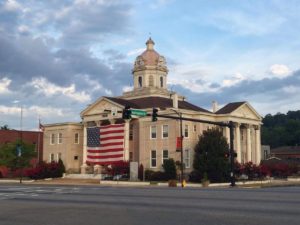