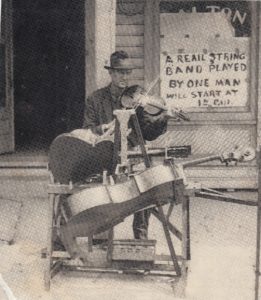 Singleton LaFayette Norris, or ”Fate” as folks knew him by, was an outstanding example of the generation of versatile and colorful musicians that made up the Golden Age of Old Time music.  He was born in Dirt Town, Chattooga County, on August 23, 1878, and is best known for playing banjo in the early hillbilly string band The Skillet Lickers, although he was poorly recorded and can hardly be heard in any of their many recordings.  The Skillet Lickers were considered the most famous string band of the 1920’s and one of the first stars of country comedy. 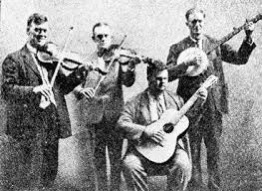 Fate was also known as the “one-man wonder” for his ability to play six individual instruments at once. The self-built contraption included two guitars, bells, bass fiddle, fiddle, and mouth harp.  He claimed to have devoted fifteen years to mastery of his art as a one-man band, and toured extensively at fairs and medicine shows throughout the South.  The first mention of Fate performing is in the July 4th, 1912 Fiddlers contest in Lawrenceville, Georgia where is is listed as from Norcross. Fiddler Bill Helms recalled seeing Norris at a fiddler’s convention in Chattanooga: “Fate Norris was there too, had a musical soapbox – made out of soap boxes with a pocket knife, and strings from mandolins, guitars, fiddles, autoharps.  Had pedals and knee pads.  Played two instruments with his feet; played a mouth harp. “ 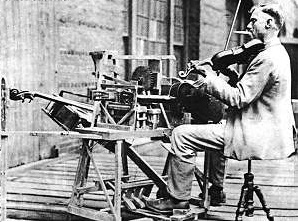 There are no recordings of Fate Norris’ one-man band, only these descriptions and a few photographs, one of which shows him sitting before his contraption, fiddle in hand, on a sidewalk in front of a hand-written sign reading: ‘A real string band played by one man will start at 12 pm’.  The photographs provide a better view of Norris’ invention, its unusual arrangement of guitars, a large cogwheel, and the three pedals for his left foot and one for his right.  He’s added kazoo to his fiddling and looks as if it is one minute past noon and he is about to launch into his first number. He hauled the contraption around in the back of a truck. It surely must have been difficult to play but he must have played it very well. The Summerville News tells us that his performance in 1941 for the ladies of the Summerville Music Appreciation Club was enthusiastically received. 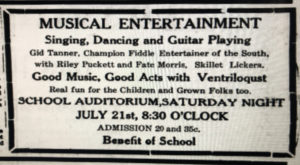 In his early years, Fate was married to Elizabeth (Lizzie), with whom he had one daughter, Mable. They were married over three decades.  In the 1900 Census he lists his occupation as farm laborer but later he lists it as musician.  The first mention of Fate performing is in the July 4, 1912 FIddlers contest in Lawrenceville, Georgia where he is listed as Fate Norris of Norcross.

Fate also had a flare for comedy that included a ‘talking doll’ and often paired with fellow Georgia musician Gid Tanner in a street performing comic duo that had the folks of the Atlanta area tearing up with laughter, and begging for more. 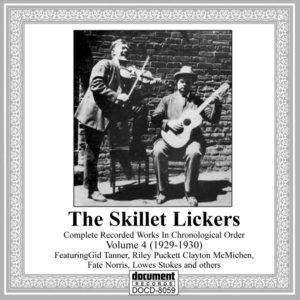 In 1925, the two of them recorded together for Columbia, cutting ”Old Time Tunes” and ”Just Give Me The Leavings.” In 1926 they were paired up again in the studio, recording era standards such as Goodbye Booze, S-A-V-E-D, and Where Did You Get That Hat? 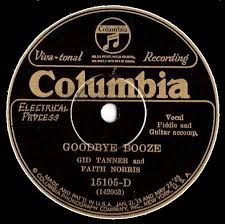 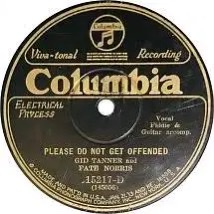 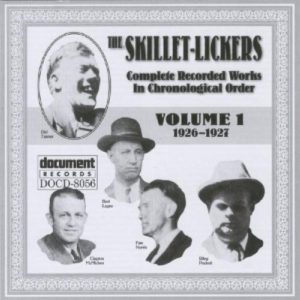 Singleton LaFayette Norris died on stage Nov 11, 1944 at the age of 66 after playing for the March of Dimes benefit in Subligna, Ga. The late historian Agnew Myers wrote  in the Spring 97 quarterly:  Fate said, “I am not afraid ” and fell to the floor. Howard, Gene and John Nicholson were local Subligna boys who had just finished playing with Fate. They were still on the stage, standing nearby, when Fate hit the floor. The way the guitar hit the floor must had signaled something to Howard Nicholson. Amid the whooping and hollering– for the Chattoogans in the audience were familiar with the hilarity of Fate Norris’s skits –Howard was the first person to kneel down to help Fate. He looked up and called out, “Is there a doctor in the house?”  Toward the back of the audience someone shouted, “Dr. Tarvin is here!” Joe Tarvin, a local farmer retorted,” I am just a cow doctor!” This precipitated another roar of raucous laughter. this was the last laugh of the night. The rhythm of the heart and the man were gone forever. The people began to sense that this was not part of the show. The festive atmosphere dissolved to quiet whispering, anxious waiting and silence. Dr. Petticort , the chiropractor who lived up the valley, was sent for, but it was too late. Fate Norris was dead. 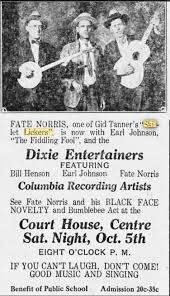 At the time of his death, Fate Norris made his home in Trion with his adopted daughter, Mabel and her husband C.H. McCullough and their children. Their house stood under the the huge oaks in what is now the park in Trion. It was a company owned house with plenty of rooms and outbuildings where Fate kept his worldly possessions –mostly musical instruments and contraptions and allegedly, a moonshine still. The children were alarmed when the police came to the door because neither their mother nor father was there. Mabel was at the “picture show” about five blocks away with and a girl friend. C.H. was two blocks away at the bovine “maternity  ward” in a barn of the  Riegeldale Farms where he was the official” cow doctor.” One policeman stayed at the house while the other went to get Mabel and C.H. It seemed a long time before they all returned. One of the children remembered,  “The house seemed to fill up with people and everyone was sad.” Later, Dr. W.U. Hyden, who lived across the railroad tracks only a few hundred feet from Fate’s house, was called upon to examine the body of his neighbor. Cardiac failure was listed as the official cause of death. On his death certificate his occupation was listed as musician and textile retired. The Funeral Home was listed as the Trion Store.

Fate was buried in the Summerville Cemetery next to his wife Lizzie. 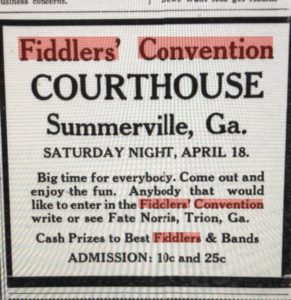