( The following article was printed in The Summerville News in 1923. It was written by 83 year old Mrs. J.W. Johnson who moved to Summerville in 1842. The pictures were added by the Historical Society for this article. The newspaper clippings following Mrs. Johnson’s history are from The Summerville Gazette in 1877. )

I, as Miss Lucy Burnett, was born in Cedar Bluff, Ala., May 5, 1840; came to Summerville in 1842 and have lived here since that time. I have seen two generations come and go and there’s but two of my girlhood friends left, Mrs. Sallie Bass, now of Rome and Mrs. Bob Pursley.  When I first remember there was but a few log houses and five framed houses and one little log court house in Summerville. The latter was built in 1842 by four men named Large, Long, Stiff and Stout. The Methodist parsonage also was completed in 1842 . (This was the first brick house in Summerville and still stands today on North Congress street  shortly past 1st Street.) 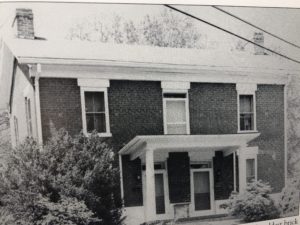 There was but one church, now the Presbyterian manse   ( southwest corner of West Washington and Congress Streets) and all three denominations worshipped there. The building was about 60 feet long and 40 feet wide. There was neither glass windows or ceilings. and a tin trumpet was used to call in the congregation. The superintendent was Uncle Ben Branner. 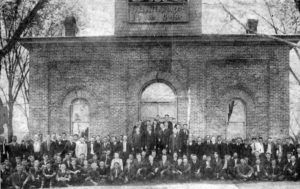 Built in 1858 this is the third building the Presbyterians worshiped in.

There were two stores, two hotels and about four saloons. The first hotel was built by Red Morrow and was located where Taylor Mercantile Co. now stands (corner of Commerce Street and East Washington Street). This held Summerville’s only ballroom, the second was at the present location of Chattooga Motor Co., and known as Burnett Hotel ( corner Commerce Street and West Washington next to the courthouse),  A racetrack was built west of Summerville. 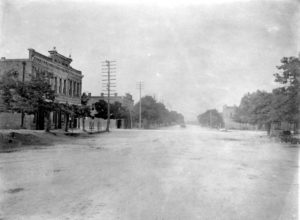 Commerce Street in Summerville circa 1910

The first cemetery was on the hill back of J.D Taylors  ( old Victorian Home on North Congress) but was later moved to the place on the east of Summerville where it is now. There were two Indian graves in the first cemetery. 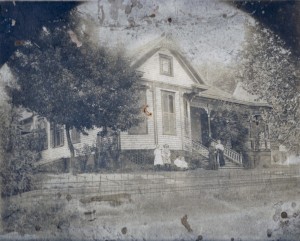 The town was laid off first to be built where the Lyerly Fruit Co. now stands but they decided to move it because of the big spring  ( Willow Spring) which was given to the town by General John Beavers. Practically all the people got their water there. There were only four houses between J.M .Bellah’s and J.V. Wheeler’s. 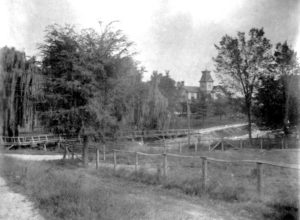 Willow Spring as it appears in the early 1900’s . The spring influenced the location of the town.

The town was incorporated in 1877 with Dr. Tucker as its first mayor. He also established a printing office in the same year over the Summerville Drug Store with himself as editor. (Read the newspaper clippings at the end of this article to see the articles of incorporation of Summerville.  They had rules for everything from cussing to no mules on the sidewalk  and not playing ball on Sunday.)

The town’s first physician was Dr. Evans. There was no railroad until 1888. All of our supplies were hauled into Summerville by wagons and teams from Rome and Ross Landing, now Chattanooga. I made a trip to Chattanooga in a wagon in 1865. It was then a very small place.  The first jail was built about 1843 and Uncle Bill Kellett was first jailer. It was a two-story frame building painted red. It had one upper room and one lower room, the lower being called the dungeon. The first man hung here was a Negro prisoner in the jail named Perry Hinman. This jail was burned by Sherman’s army in 1864. The second jail was built about 1867. Judge Underwood was the first judge I remember. The first frame house that was built here was by Gen. John Beavers and is the N.K. Bitting home. 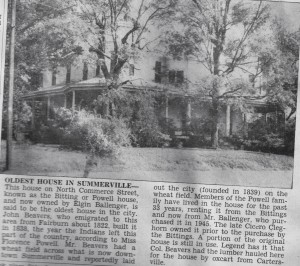 I have been a member of the Methodist church for 67 years and my letter has never been moved. I was married in 1885 to John W. Johnson, was was a wheelwright during the Civil War.  Mr. Johnson had a cousin to come here who was a Yankee spy.  Mr. Johnson , fearing the people would become indignant when the learned Seaborn Grimmet was a spy, left and was a wheelwright for the government in Chattanooga for about four years.  Mr. Johnson was born in 1830 and died in 1918 and was Summerville’s oldest citizen.

I love the town of Summerville and am the only person living that saw the little town started. 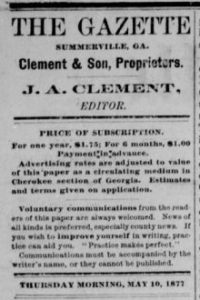 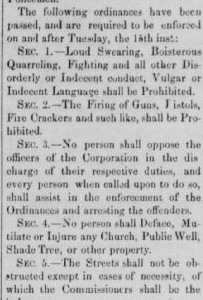 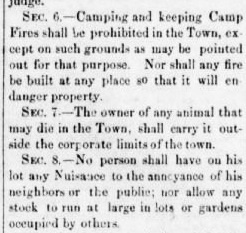 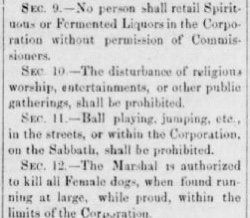 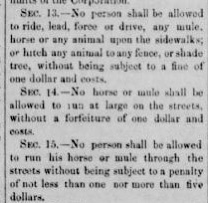 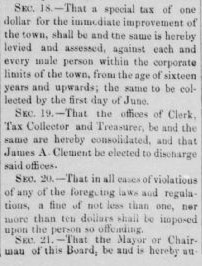 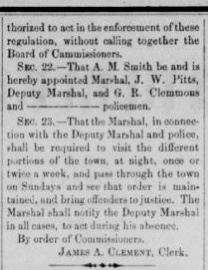