One of the most beautiful historic buildings along Commerce street is our lovely Post Office built in 1937. The site  chosen was where the Moyers home sat prominently  near the courthouse, businesses and offices and was the intersection for everyday life for most of Chattooga Countians. 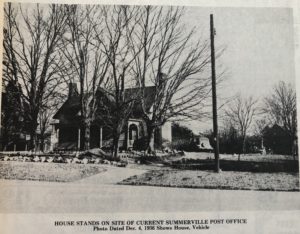 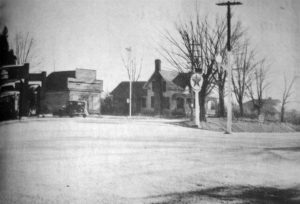 The Moyers home going south on the Commerce Street. The gas station building is still there and the next building is the old Pitts store building.

George Jacob “Jake” Moyers was born in 1838 in Tennessee. After serving in the Confederate Army he moved to Chattooga County in 1867. His family was closely related to the Benjamin Branner family who built one of Chattooga’s first brick homes and stores in the very early 1840’s. G.J. “Jake”  Moyers died in 1924 in Summerville.  Jake was married two times. His first marriage was in Tennessee and his second  was to Mollie Calhoun from the respected Calhoun and Bass families from north of Summerville. The Moyers had 7 children of which the last died in 1937. Jake operated a tannery for many years just south of his home . 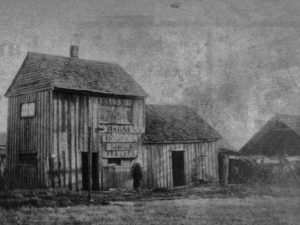 Jake Moyers waged a nineteenth century, one-man battle against the numerous saloons in Summerville. Mr. Moyers was a devoted member of the Methodist Church all his life. He served as superintendent of the Summerville Methodist Sunday School for forty years and as a steward for longer period. Despite the best efforts of the saloon proprietors and some of Summerville’s most adept politicians, a referendum was held and Mr. Moyers temperance views won out handily. Because the city limits of the town of Summerville ran, in each direction, one half mile from the courthouse steps, many saloons moved south just outside the city limits– the city might be dry, but not the county. As a rather enjoyable wry joke, the new community that sprang up around the saloons was called “Jakeville”.  While the name is not heard often now , it is preserved today with the name Jakeville Street which runs through the area. One can only hope that Mr. Moyers himself got some enjoyment the joke and his crusade which stood the test of time for over a century.

When the lot was purchased for the building of the Post Office, the Moyers house was moved to a lot behind the Post Office. A rear wing was removed but the main part of the house remains today as the North Georgia Crisis Pregnancy center. Construction of the new Post Office. Construction began in 1937, and continued in earnest through much of 1938, with land-scaping in 1939. Steel and wood were used for framing. The building contains 3,304 square feet on the main floor and the basement contains  3,058 square feet. The lot was purchased for five thousand dollars and the approximate cost of the building was fifty thousand dollars. 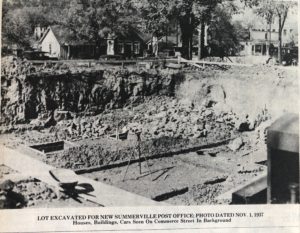 Notice the corner of Commerce and Georgia Avenue in the upper right of the photo. It was known as “Godwins Corner”. 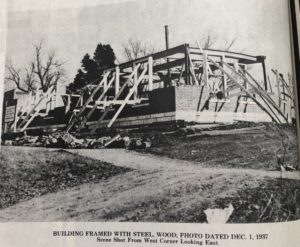 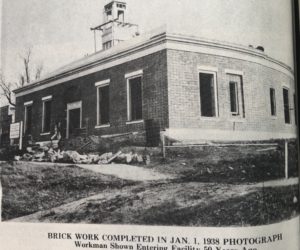 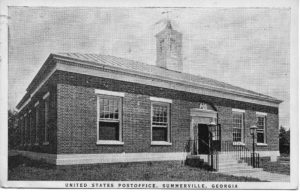 This is a postcard of the completed building. Notice the open windows as this was before air conditioning. 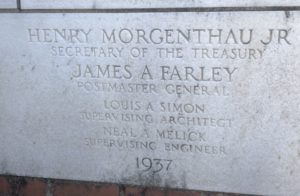 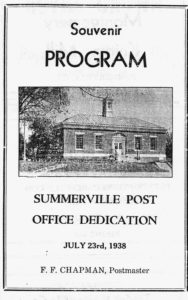 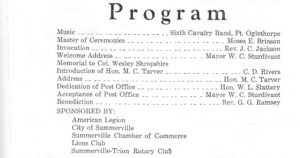 A highlight of this wonderful building is the mural on the wall to the right as one enters. In 1964, Miss Doris Lee was interviewed in Woodstock, New York, by Joseph Trovato for the Smithsonian Archives of American Art.  Miss Lee, a renowned painter, like many others, was involved in public works during the latter part of the depression. After completing the mural for the Washington, D.C post office, who would have dreamed her next assignment would be for the post office in Summerville, Georgia?! Of her second mural, Miss Lee remembered:  “Yes, and that one was for this post office in Georgia, so I studied the things about Georgia ( in driving south, I have been through Georgia many times)..it was mostly the Georgia streams. I think there were the peach trees and all sorts of things of Georgia. Anyway, it was very amusing during that time because people from Summerville would come to my studio in New York and the mayor and lawyer and so on. And we had a great good time. I mean they would come and see how it was going and we’d all go out and have lunch. Very nice time, Very nice people.”  The mural is entitled “Georgia Countryside.” Miss Lee completed it in 1939. It had deteriorated enough in the 1980’s to require touching up. The New Deal art was sponsored by the federal government–1100 post offices throughout America benefited. The mural was not done in conjunction with the WPA sponsored art program as many have believed. While the programs were similar in nature, one benefited federal buildings, the other state and municipal buildings in large cities. 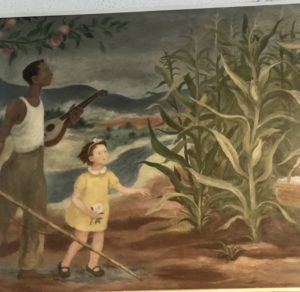 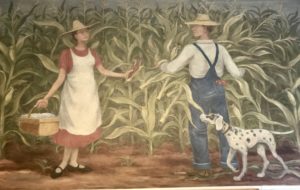 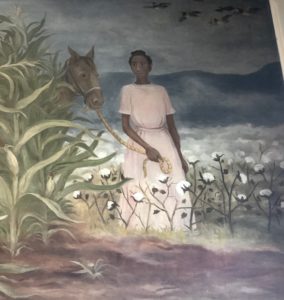